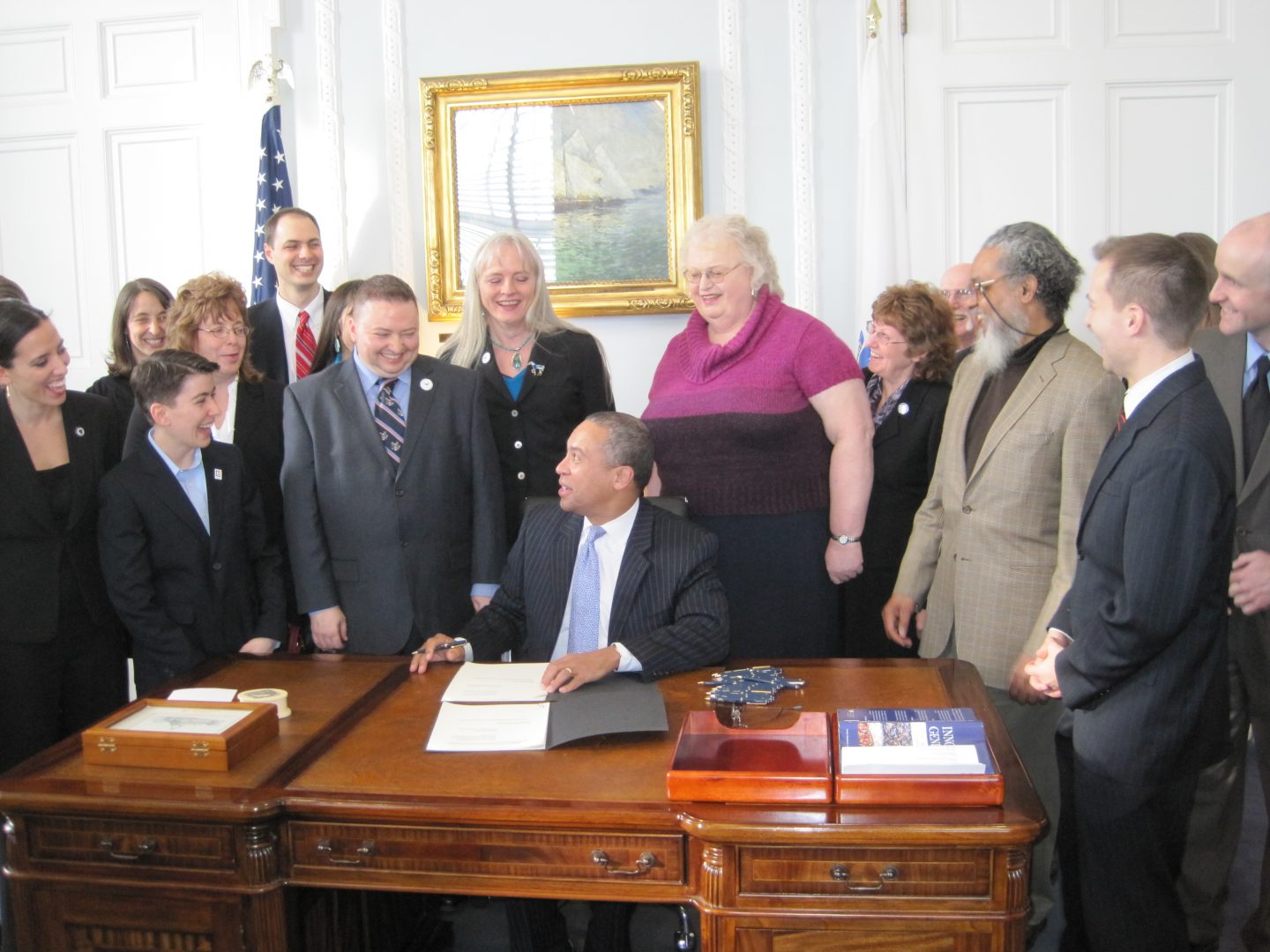 Massachusetts Transgender Political Coalition is the longest-running transgender advocacy organization. In just over two decades, we have successfully lobbied for comprehensive transgender rights in the state and supported national legislation for LGBTQ+ inclusion. In addition to our political work, we have consistently provided community events and resources, educational services, and transgender visibility.

Trans Advocacy in MA before MTPC: Before 2001

Transgender, non-binary, and gender non-conforming people have always existed and fought for their rights to survive and thrive. The political change that MTPC has been able to do builds on generations of the trans community. We are especially grateful for the activism and visibility of the Street Transvestite Action Revolutionaries, ACT UP, and FTM international. In Massachusetts, specifically, we are grateful for the precursing work and partnerships with GLAD, The Outreach Institute of Gender Studies, BAGLY, The International Foundation for Gender Education, The Tiffany Club of New England, and The Network/La Red.

In 1998, a Massachusetts community member and black transgender woman Rita Hester was murdered. Her death sparked community outrage and Transgender Day of Remembrance, where we pay our respects to the transgender siblings lost to violence. We are in debt to the lives, losses, love, advocacy, and survival of generations of transgender people in Massachusetts and beyond.

MTPC was started by a group of trans lawyers and community members meeting at Northeastern Law School, working to create momentum around trans rights. In the early days, MTPC was centered on community building and education. MTPC hosted events and townhalls across the state, gathering feedback about trans needs and experiences. MTPC also provided paid trainings for local organizations like MIT, the Tiffany Club, and Boston College.

During this period, MTPC succeeded in a couple of key initiatives. In 2002, we fought for Boston’s Ordinance regarding discrimination based on gender identity or expression, which passed 9-1 in October. In 2005, we launched the “TransEducation Now!” project, a guide and support network for student activists, administrators, and teachers in eliminating barriers for transgender and gender variant students in high schools and colleges. In 2006, we raised money to add memorial stones for trans individuals in Boston’s new Garden of Peace.

“Over the course of a yearlong campaign, MTPC deliberated on the language and scope of our ordinance; gathered hundreds of petition signatures from Boston-area residents in support of the ordinance; solicited endorsement letters from local organizations, schools, and businesses; networked with activists on the national level to lead a day-long training on lobbying and testifying; met with each member of the Boston City Council to ask for their support of the ordinance; developed a media strategy; and presented testimony at a public hearing before the City Council.”

By the end of 2006, MTPC was established as a nonprofit fiscally sponsored by the Boston Alliance of GLBT Youth (BAGLY). We had also elected a steering committee made of longtime members: Holly Ryan, Gunner Scott, M. Barusch, Evan Hempel, Nancy Nangeroni, and Diego Sanchez.

By 2007, MTPC started its fight for statewide legal protections for transgender people. Over the course of five years, we fought for various iterations of The Transgender Equal Rights Bill, an anti-discrimination bill sponsored by representatives Carl Sciortino and Byron Rushing. Despite two failed attempts, the act finally passes in 2011. The act gives transgender people equal protections when seeking employment, housing, credit, and education and expands the state’s hate crimes protections to now include transgender people.

MPTC was invaluable to the success of the act. We hosted lobby days and letter-writing campaigns, provided phone scripts and advocacy resources, and collected public testimony. And, we co-launched a Free Monthly Legal Clinic for Low-Income transgender people alongside TransCEND, AIDS Action Committee of Massachusetts, and Massachusetts Transgender Legal Advocates.

Integral to MTPC’s success was our work in public education. Not only did we continue to provide trainings, but we also utilized the internet to spread the word more widely. In 2009, with GLAD, we released “Everybody Matters,” a documentary on trans people in Massachusetts. In 2010, we launched “I Am: Trans People Speak” which collected videos and images of trans people, speaking about their experiences.

Throughout the period, MTPC continued to provide space for the community. We started Kaleidoscope, a social/networking event for trans people of color, and the Interfaith Committee for Transgender Equality. In addition to hosting yearly pride and Transgender Awareness Week events, we launched the Transgender Youth Summit and Lawyers (now titled Professionals) for Trans Rights fundraiser.

Despite the resounding success of the Transgender Equal Rights Bill, the final version passed by the legislature, unfortunately, did not include protections within public accommodations. (Public accommodations are locations other than home, work, and schools such as a public park, movie theater, or medical office.) MTPC’s next legislative fight was to make sure those spaces are included in anti-discrimination laws.

Over the course of five years, MTPC successfully lobbied for the passing of An Act Relative to Transgender Anti-Discrimination, despite ambivalent support from Governor Charlie Baker. Twitter is a key activism tool for MTPC during this period, using the hashtag “#MAtransbill” to organize only lobbying. The bill is signed into law in July of 2016.  During this period, in 2013, Gunner Scott steps down as executive director and Mason Dunn is appointed.

Despite the public accommodations’ success, anti-trans lobbyists filed a referendum on the 2016 law, to repeal the protections. MTPC organized alongside GLAD and Freedom for All in the “Yes on Three Campaign,” to ensure the law remained. The campaign is a success and in 2018, MA residents voted to keep transgender protections on the books.

From Protection to Power: 2019 – present

In 2019, Mason Dunn steps down as Executive Director and Carmel Tre’Andre Valentine is appointed. With protections on the book, MTPC’s focus shifts to building community power and surveys the community needs. In the announcement, we stated:

“After successfully defending trans rights in public accommodations in 2018, MTPC is focusing our efforts to center intersectional community development and leadership, and working toward lived equity. To stay accountable to the communities we serve and represent, MTPC is conducting a community needs assessment to better understand the needs of transgender and non-binary youth, adults and families in Massachusetts.  Take our survey to share your vision of MTPC’s role in helping to address your needs, and help shape the direction of our future efforts.”

In light of the COVID-19 pandemic, our efforts pivot toward the immediate emergency. We shared mutual aid and community resources, publicized virtual LGBTQ+ events, and released “Guiding Principles for Gender Affirming Care During COVID-19.”

But, we continued our work towards building trans power. In 2021 we announced our Trans Leadership Academy in direct response to the Community Needs Assessment. This program seeks to alleviate major hurdles that TNBGE individuals face due to disproportionate rates of unemployment, incarceration, poverty, and houselessness, particularly for BIPOC TNBGE people who face intersectional discrimination. This program will focus on providing TNBGE individuals with skills, knowledge, experience, and support that they are often not afforded the privilege of gaining in traditional educational or workplace settings. By supporting TNBGE people with workforce development, mentoring and training, and material and financial support in an affirming environment we hope to alleviate the issues of unemployment, economic inequity, incarceration, and recidivism.

By 2022, we are in a state of rapid growth. This March, we launched our partnership with Namesake, a trans-led business, to better help MA residents change their legal name and gender marker. And as of May, we have three full-time salaried employees – the most MTPC has ever had in our 20+ year history.

Please join us as we continue to fight for trans power and lived equity!